The Cleveland Browns have won their opening game of the 2022 season, 26-24. In other news, Hell reported record low temperatures and there is a high chance it is currently ensconced in ice. The Browns , almost never win season openers. Since 1999, the Browns are an astonishing 2-21-1 in their opening games.

Not quite 84 years, but close.

Browns kicker Cade York hit a 58-yard field goal with 8 seconds remaining to seal the win. Per usual, this game left Browns fans with extreme levels of joy, jubilation, frustration, anger, and relief. Many of those even took place during the Browns final drive.

Going into the game, the primary storyline was former Brown Baker Mayfield, now with the Carolina Panthers, going up his former team. Mayfield was understandably fired up for the game and did his best to extend the Browns season opening woes. 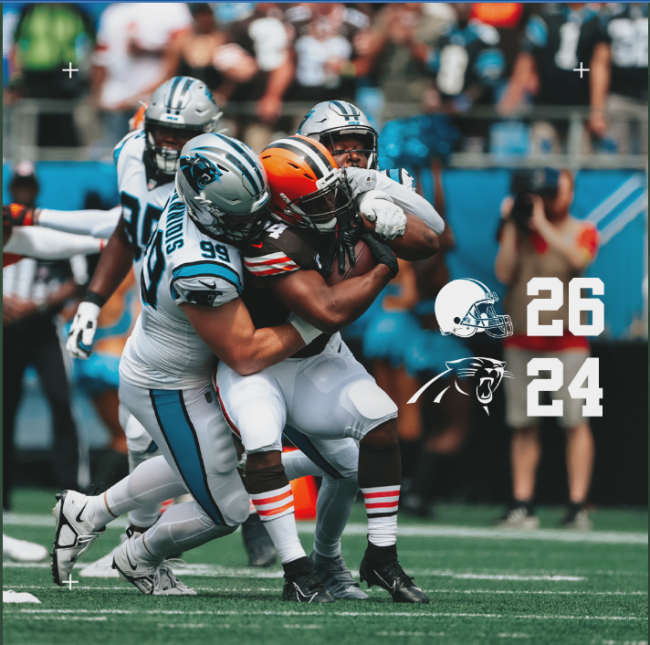 Drink that score in Browns fans.

So, how did the Browns pull it off?

Carolina’s quarterback Baker Mayfield was 16 of 27 for 235 yards 1 touchdown, and 1 interception. The Browns quarterback, Jacoby Brissett, was 18 of 34 for 147 yards, and 1 touchdown. Neither quarterback looked great but Baker started to get the Panther offense humming in the 4th quarter. Whereas the Browns mostly sputtered on offense, relying heavily on Nick Chubb and Kareem Hunt. Chubb totaled 143 yards overall and Hunt gained 70 yards overall along with 2 touchdowns. 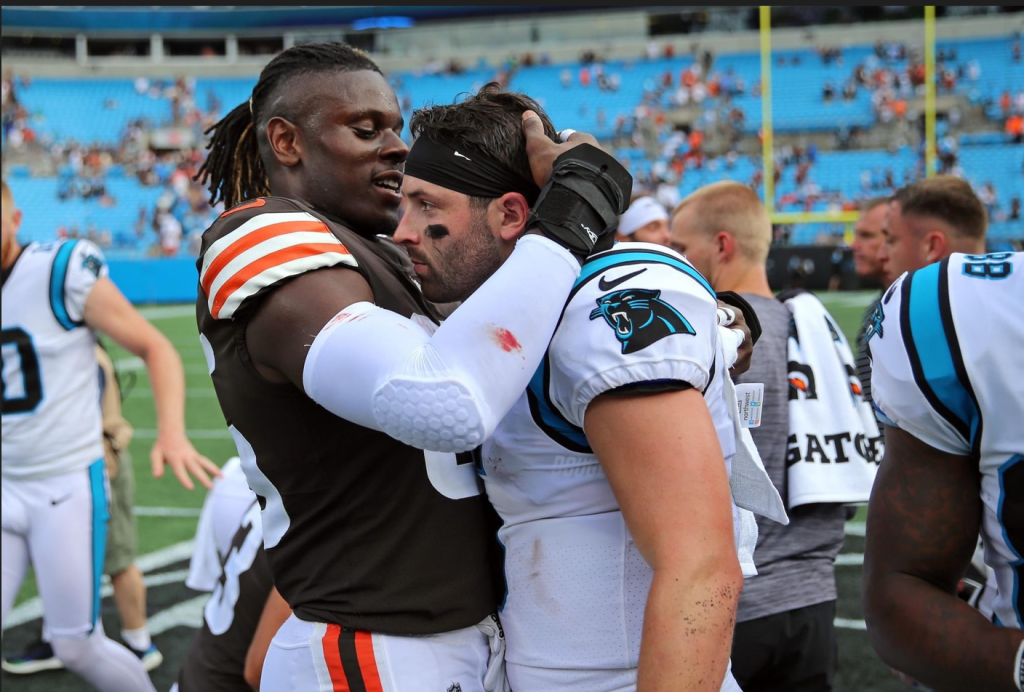 Quite a few emotions in this picture of Browns tight end David Njoku (left) and Panthers quarterback Baker Mayfield (right).

Cleveland fans knew that in order to win, the Browns would need Chubb and Hunt to play well. They both delivered and the standout receiver was Donovan Peoples-Jones who had 6 catches for 60 yards. Not a stellar offensive performance but enough to win against the Panthers.

The Browns defense was dominant in the 1st half. They allowed one 50 yard throw on a broken play but also totaled 4 batted passes, 2 sacks, and 1 interception. The Panthers were fortunate to only be down 17-7 at the half.

Baker Mayfield however was able to generate 17 points in the 2nd half. A good portion of the Panthers offense came off some slightly off, busted coverage, or generally broken plays. Defense can be tricky to judge as they played “well” for the most part. Those big plays though. I can’t help but be reminded of former Browns coach Butch Davis speaking after Jamal Lewis sliced open the Browns for a then-NFL record 295 rushing yards in 2003.

Ok sure, but the other 5 netted Lewis 235 yards so, maybe not the best rationale. Against the Panthers, the mistakes weren’t that catastrophic but it was an issue.

The Browns drafted kicker Cade York in the 4th round of the 2022 NFL draft. The Browns were also heavily derided for selecting a kicker so high. Browns General Manager Andrew Berry probably spent Sunday night texting the word “justice” to everyone who laughed at drafting York in the 4th. 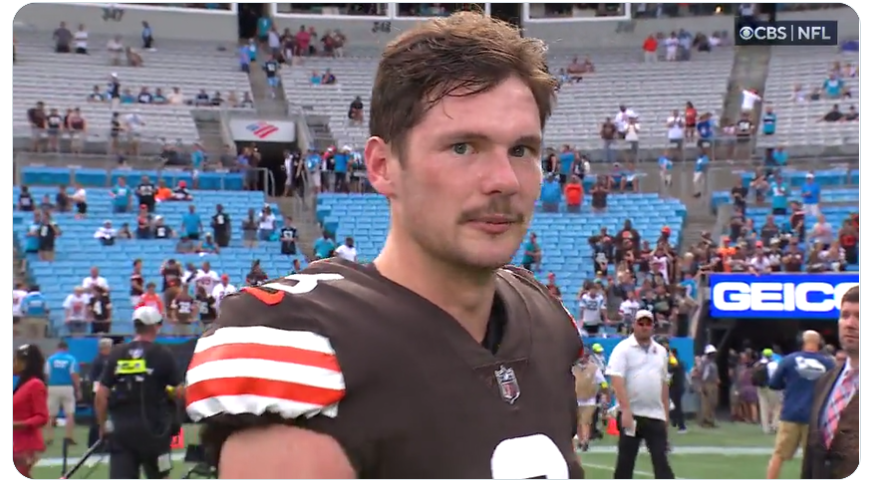 York made 4 of 4 field goals in the game. Including the incredibly pressure-packed 58 yarder with 8 seconds left. I am still in awe, that final kick looked to be good from 65 yards, if not more.

Mayor Bibb gets it.

The Browns play the New York Jets in Cleveland next Sunday, September 18th at 1 PM. The Jets are coming off an opening game home loss to the Baltimore Ravens by a score of 24-9. Naturally, the Jets want to avoid starting 0-2 and will be looking to play better this Sunday.

We will do a preview of the Jets-Browns game later this week. In a nutshell, the Browns passing game and by extension Jacoby Brissett, need to be more dynamic. Additionally, the Browns defense can’t give up the big plays that put the Carolina game in doubt.

Lastly, Cade York may once again need to put the team on his back and keep nailing field goals and hopefully a few more extra points.

What were your thoughts on the Browns victory over Carolina? Are you joyous? Tentatively optimistic? Uncertain? Let me know in the comments and keep it civil Browns fans.

Previous
Mariner’s Watch
Next
Can the Browns actually win an opener?!