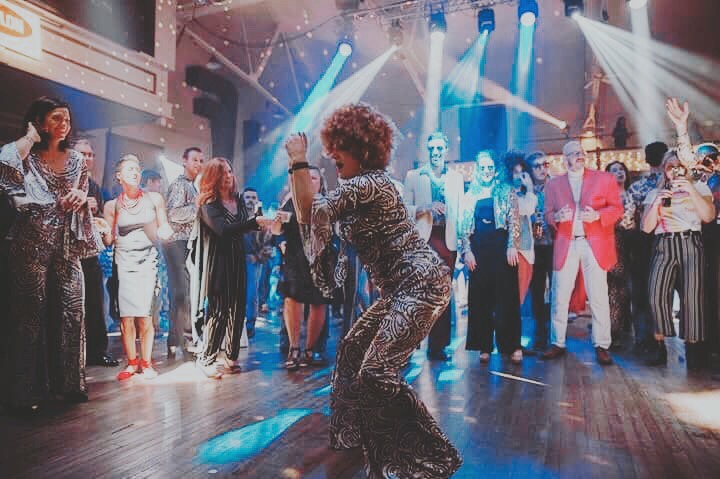 Guys, I’m coming down with a fever. DISCO FEVER, that is. We couldn’t be more excited to get our boogie on this April 6th for the 3rd annual Downtown Disco Cleveland event held at Grays Armory. Haven’t heard of this party? It’s it’s one of Cleveland’s best kept secrets! Once a year, people of all ages come together for a magical night of costumes, dancing, and an open bar – all while benefiting Connecting For Kids, a local charity that provides support to families of children with special needs.

I had the chance to sit down and chat with Chuck Mulé and Michael Hurley, the two guys who brought this party to the life for the first time. It all started in 2016 after winning an entrepreneurship competition at John Carroll University. One of the judges, Dick Anter, became a mentor to Mulé and Hurley by encouraging them to make the party a reality and giving them priceless guidance that resulted in their very first event selling over 450 tickets. Since then, word spread like wildfire and last year resulted in 600+ tickets being sold- bringing in people from all over the country to experience the funk.

Hurley’s eyes lit up as he spoke about his favorite moment of the night – when “Dancing Queen” by Abba comes on and the dance floor floods with folks of all ages – from 21 to 65. “This party really breaks down barriers, bringing together people from all generations and ethnicities for one beautiful night a year.”

“My favorite moment,” says Chuck Mulé, “is watching someone who may have been hesitant to come initially, have the time of their lives.” and continued on telling me “I’ve heard so many people say they can’t wait to come again the next year.” I’ve personally spoken with attendees and have heard similar sentiments, phrases like “It’s the best night of the year” and “I went the first year and absolutely REFUSE to ever miss one – they are so much fun!”

Costumes are a big part of the fun of the evening, with everything from glitter to bell-bottoms to platform shoes. Chuck warned guests to try to stay away from large chain costume shops if you want a unique look, and instead head to thrift shops or local rental costume shop like Chelsea’s Vintage in Lakewood. Personally, I am a huge fan of costume parties and can’t wait to find some psychedelic threads.

Tickets are $59.99 and include four glorious hours of dancing and a fully-stocked open bar. Buy yours now because it’s guaranteed to sell out before the event and this is one far-out party you do NOT want to miss. I’ll see you on the dance floor!

Exponent is a modern business theme, that lets you build stunning high performance websites using a fully visual interface. Start with any of the demos below or build one on your own.